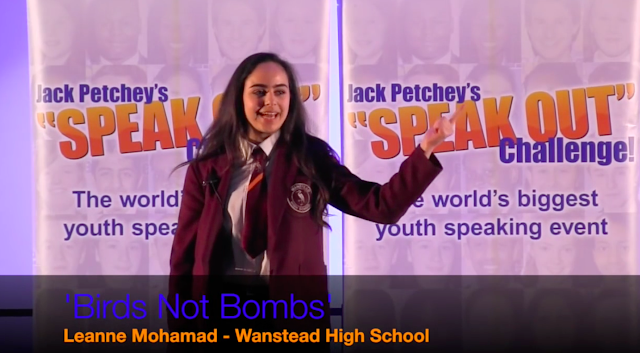 A colleague characterised her talk as "full of anti-Semitic and aggressive material from sources in the Middle East". I watched the video, and heard nothing anti-Semitic. It is a word that should be used with care.

Speaker's Trust has released a statement regarding the matter:


“There are two fundamental rules that are made explicit during the training: the speech must have a positive and uplifting message – in fact this is one of the core terms of the agreement with the Jack Petchey Foundation [and] a speaker should never inflame or offend the audience or insult others and this, by definition, means that propaganda is ruled out absolutely from the outset… Speakers Trust and Jack Petchey Foundation judging panel decided unanimously against sending Leanne Mohamad through to the next stage and she will not be speaking at the Grand Final. These were precisely our concerns.”


Our primary duty of care is to the young people we work with and we cannot tolerate any form of insult or abuse. We are concerned and saddened that Leanne’s experience has been less than positive.
Leanne Mohamad is the Redbridge Regional Final winner and there has never been any suggestion that she should be disqualified. Almost 190,000 young people have spoken out over the years on any topic which they feel passionately about and none has ever been banned from the process or silenced.
We are, however, a small charity without the capacity to moderate comments 24 hours a day and it was considered essential to protect Leanne by temporarily suspending the regional video over the bank holiday, until we were able to consult with her school and family.
Of 37 talented regional Champions only fifteen can be voted through to the Grand Final. This selection process took place on Saturday 21st May based on standard judging criteria and without any external influence or input.
The general “rules” of effective public speaking are guidelines to help speakers to create a speech that will connect with a large and diverse audience and every speech was judged on its own merits. At the heart of what we do lies the determination that all of our young speakers, irrespective of background, race or creed, should be able to speak out in a safe and supportive environment.

Omar Barghouti banned by Israel for travelling for supporting BDS 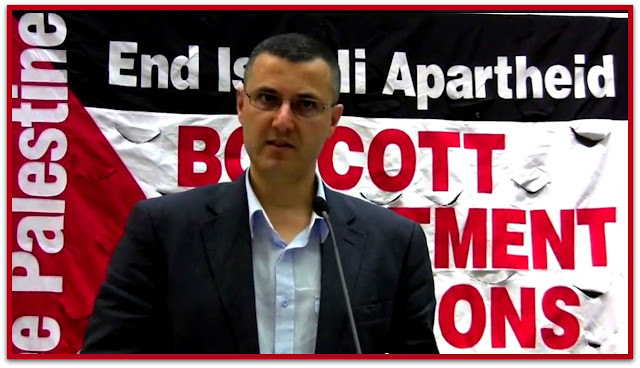 Omar Barghouti, a Palestinian living in Israel, has been denied the right to travel, for no reason other than that he is an effective supporter of BDS (Boycott, Divestment, Sanctions). Glenn Greenwald interviews him in The Intercept.


Despite having lived in Israel for 22 years with no criminal record of any kind, Omar Barghouti (above) was this week denied the right to travel outside the country. As one of the pioneers of the increasingly powerful movement to impose boycotts, sanctions, and divestment measures (BDS) on Israel, Barghouti, an articulate, English-speaking activist, has frequently traveled around the world advocating his position. The Israeli government’s refusal to allow him to travel is obviously intended to suppress his speech and activism. Prime Minister Benjamin Netanyahu was one of the world leaders who traveled last year to Paris to participate in that city’s “free speech rally.” ...

Sarah Leah Whitson of Human Rights Watch told the Electronic Intifada that “Israel’s refusal to renew Barghouti’s travel document appears to be an effort to punish him for exercising his right to engage in peaceful, political activism, using its arsenal of bureaucratic control over Palestinian lives.” She added: “Israel has used this sort of control to arbitrarily ban many Palestinians from traveling, as well as to ban international human rights monitors, journalists, and activists from entering Israel and the occupied Palestinian territories.” ...

Barghouti: Many people are realizing that Israel is a regime of occupation, settler colonialism, and apartheid and are therefore taking action to hold it to account to international law. Israel is realizing that companies are abandoning their projects in Israel that violate international law, pension funds are doing the same, major artists are refusing to play Tel Aviv, as Sun City was boycotted during apartheid South Africa. ...

We live in a country where racism and racial incitement against indigenous Palestinians has grown tremendously into the Israeli mainstream. It has really become mainstream today to be very openly racist against Palestinians. Many settlers and hard-right-wing Israelis are taking matters into their own hands – completely supported by the state – and attacking Palestinians. 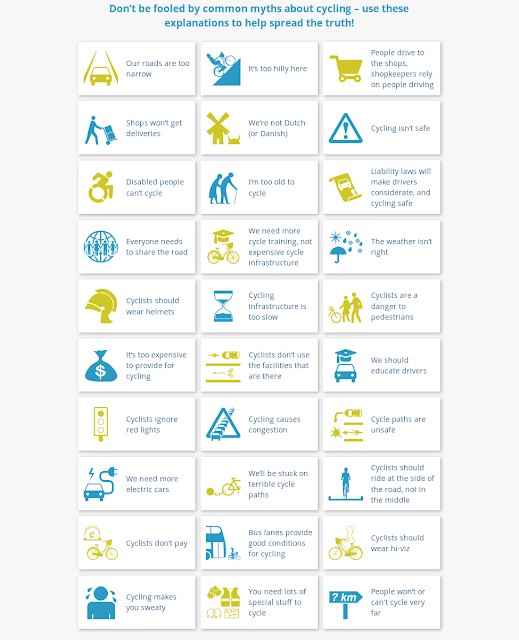 Cycling Fallacies is a handy reference from The Cycling Embassy of Great Britain. A sample entry is copied below. Spotted by Ewen Maclean.

Your cycling fallacy is…

“If you put in a cycle lane, or pedestrianise a road, shops will get less business.”

Cycling infrastructure (or pedestrianisation) does not restrict access to shops – it can actually make the streets and roads shops are on nicer places to visit, increasing footfall, and overall demand.
Many studies – from the Netherlands in the 1970s, to big US cities in the 2010s – have found that installing cycle infrastructure does not have a negative effect on income of businesses, and in most cases has a positive effect.
It's a popular myth that people who arrive by car spend more. People who arrive at shops on foot, or by bike, may spend less per visit, but they will visit more often, and they will spend more money overall. And being able to access a shop easily by foot or by cycle means that more frequent trips involving smaller ‘baskets’ become more convenient.
The headline message is: well-designed streets that make cycling and walking attractive are good for business. And in any case, cycling infrastructure won't stop people driving to shops, or parking near them and walking a short distance. 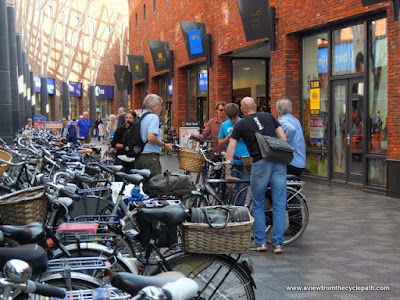