Hubble captures dance of the galaxies 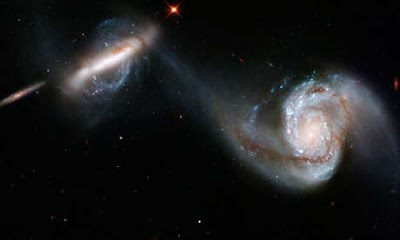 A stunning photo, courtesy of the Guardian.

The Law of Leaky Abstractions

From Joel Spolsky's blog. Obvious, but no less important for that, and I've never seen a name attached to this important phenomenon before.

As program chair of POPL 2008, I followed tradition and organized a program committee meeting in Edinburgh last September, attended by 22 members. They worked very hard, and went to great lengths to attend (literally---members came from Japan, New Zealand, and India), and the result was a program I'm looking forward to seeing next January.

But after I sent out the invitations, I read George Monbiot's Heat, and began to wonder if I had made the right choice. If the world got serious about stopping climate change, what would be an equitable figure for Britain's carbon emissions? Monbiot reckons we would need to reduce our carbon footprint to 10% of current levels by 2030. Remarkably, he sketches out a plan whereby this can actually be achieved for house heating, energy sources, ground transport, and so on. With one exception: the only way he could find to reduce the carbon footprint of air travel is to travel less. Way less.

I'm not one of those campaigners who believes that the way to save the world is to bike to work. (I do bike to work, I just don't believe it will save the world.) The solution to our problems will be political, not personal. I'm not willing to stop flying abroad for vacation while the Government's official policy is to expand airport capacity.

But the carbon footprint of a program committee is not negligible. (For POPL, we have a 20+ PC, as compared to 200+ attendees.) And conferences are not personal, they are run by collections of people who can express a political point of view.

Without the climate issue, there are strong arguments both in favor of and against physical PC meetings. For me, the climate issue tips it: I think it is time for conferences like POPL to begin to experiment, to see whether virtual pc meetings might be comparable in effectiveness to physical. It's out of my hands now, but the program chair of the next POPL is considering just that.

I only recently discovered the Scottish National Gallery, wandering in after visiting the Warhol show at the neighboring Scottish Academy. I was blown away by two pictures. One is listed above.

The other was John Knox, View from Ben Lomond. (Thanks to Anonymous for the correct link!)

A simple idea: ask every blogger to post on the same topic on one day, a powerful illustration of how the web can enable democracy. On Monday 15 October 2007, the topic is the environment. Watch this space!