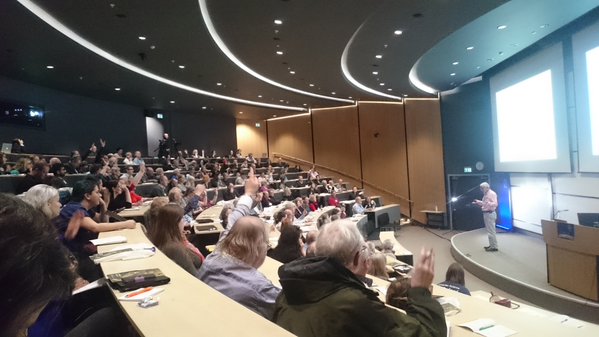 I was fortunate to attend a celebration of Ada Lovelace's 200th birthday at Oxford, featuring fantastic talks by Sydney Padua, Bernard Sufrin, Judith Grabiner, and many others. After the first session of three talks I thought "I wish all of those were longer", something I cannot remember thinking ever before! It's all online, so you can see it too. 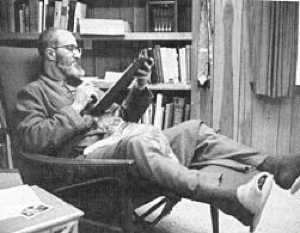 Paul Halmos offers excellent advice on refereeing, two tenets that he formed as a young referee and confirmed as an experienced editor: "be Boolean; be prompt". 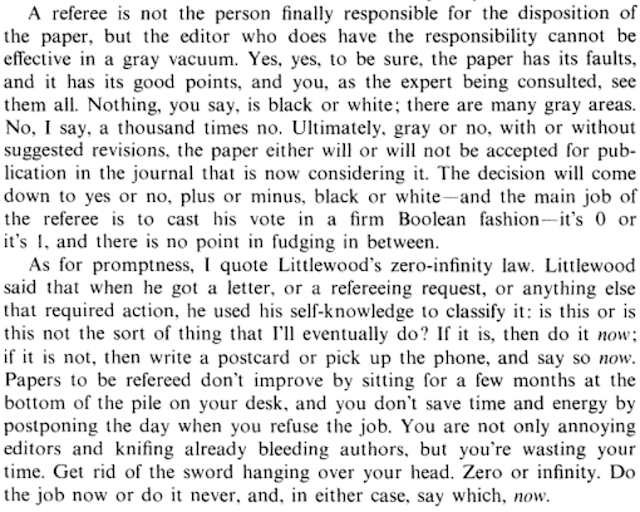 From "I want to be a mathematician: an automathography" by P. R. Halmos. 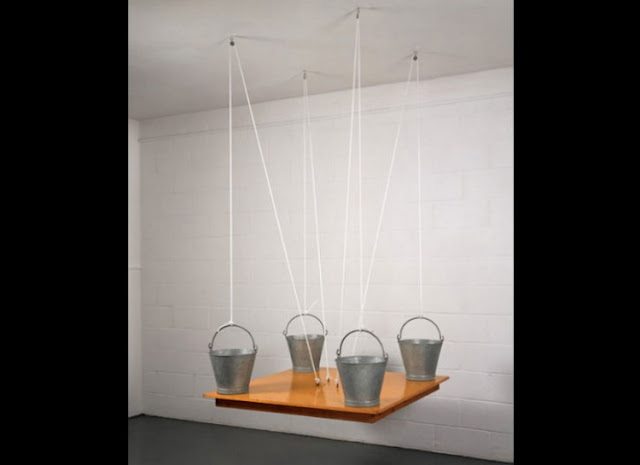 Three images, spotted by Ohad Kammar (@aleph_kappa). Ohad suggests they illustrate recursion, but I think they represent impredicativity. Impredicativity is a category error, when a predicate applies to itself, as in Russell's paradox; but also a defining feature of polymorphic lambda calculus, where a function abstracted over a type may be applied to its own type. 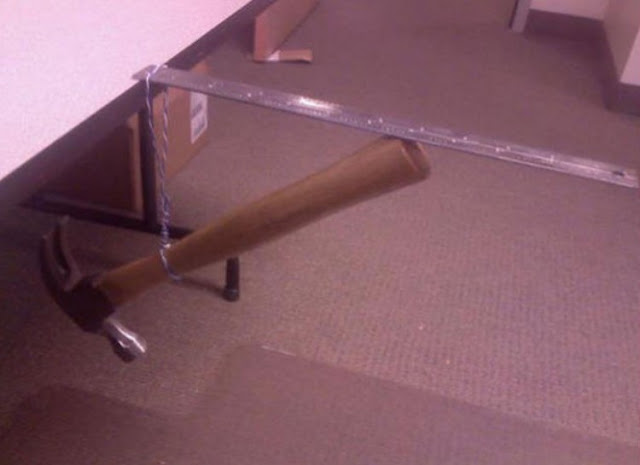 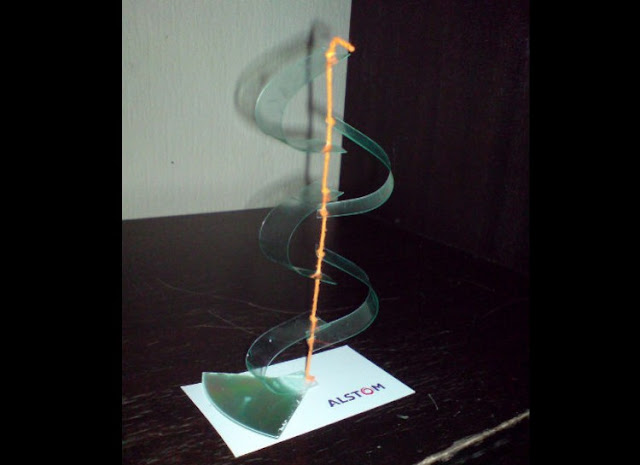 There is genuinely, genuinely good news about the environment this week, the Paris climate deal has been signed, a global agreement made by 195 countries to try and keep temperature rise below 1.5 degrees as we move away from fossil fuels. President Orlande said "History is coming. In fact, history is here." Which I'm not sure is quite how history works. I take his point. And the Prime Minister himself said "This global deal now means the whole world has signed up to play its part in halting climate change." And what inspiring words those are. And with those inspiring words, he beetled off home to see what part he could play in this global effort. And only a few days later he managed to change the law about fracking under Britain's national parks. I know what's happened though, it's a simple misunderstanding. They've heard everyone in Paris talking about how we must move to a fossil-fuel free future and said to themselves "Hang on, there's a bit of fossil fuel left under the Lake District. Better dig that up pronto and burn it." I assume that's what happened. Either that, or it's just like when you go to the gym, and then on the way home you say to yourself "Well, I've earned myself some fish and chips". Except of course the Paris agreement is actually a collection of largely non-binding aspirations for the future, so this is more like saying "I really must go the gym more often. Well that's earned me some fish and chips."

Roy Thompson, FRSE, is Professor Emeritus and Senior Honorary Professorial Fellow, and a former Professor of Environmental Geophysics at the University of Edinburgh, and a friend of my cycling buddy Shane. In his video, available on the University of Edinburgh Social Responsibility and Sustainability page, he opines on the results of Paris. While the Paris accords speak of limiting warming to 1.5C, his model shows that at our current pace we should expect warming of 8C by the end of the century. Experts are divided, but even if all the parties to Paris deliver on their current pledges it will cut the 8C by only 0.1C to 0.5C. Time to redouble the campaign to leave it in the ground. 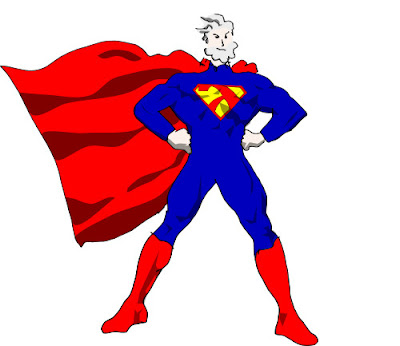 I feel shy, humble, and honoured announcing this, but it's been pointed out to me that readers of this blog may find the following event of interest: LFCS 30 and WadlerFest. It looks like a fantastic line up. (I can say that because I've had nothing to do with it.) Many, many thanks to the organisers and contributors, and special thanks to Janne Irgens for the illustration above.

How to lie (or not) with statistics: the Y axis


Vox debunks complaints it receives about graphs with a y-axis that starts at a position other than zero.

Paris climate promises will reduce temperatures by just 0.05°C in 2100 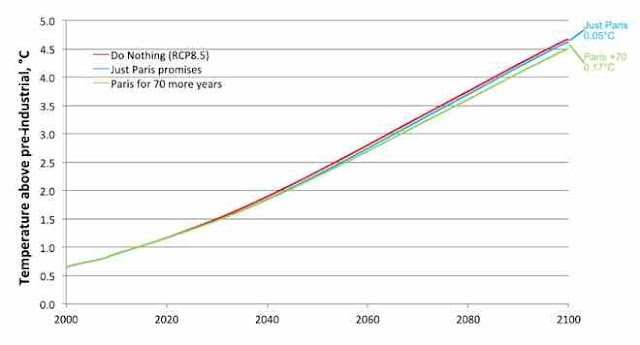 Flávio Brasil has released Quill, a Scala library that supports database query via the QDSL technique, as described in our papers A Practical Theory of Language Integrated Query (ICFP 2013) and Everything Old is New Again: Quoted Domain Specific Languages (PEPM 2016).

A list of cycling resources, suggested by Iain Longstaff. I expect these to be a huge help in lobbying Edinburgh to build more segregated cycle paths. The video is well worth the short time it takes to view.

A View from the Cycle Path
A dutch blog detailing the advantages of cycle paths.

Bicycle Dutch
About new infrastructure being built in the Netherlands.

Good Cycling Facility of the Week
Examples of cycling facilities drawn from the UK and the Netherlands. 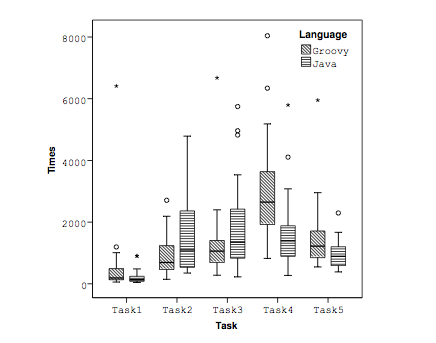 A thorough study by Dan Luu. From the introduction:


The summary of the summary is that most studies find very small effects, if any. However, the studies probably don’t cover contexts you’re actually interested in. If you want the gory details, here’s each study, with its abstract, and a short blurb about the study.

And from the conclusion:


Other than cherry picking studies to confirm a long-held position, the most common response I’ve heard to these sorts of studies is that the effect isn’t quantifiable by a controlled experiment. However, I’ve yet to hear a specific reason that doesn’t also apply to any other field that empirically measures human behavior. Compared to a lot of those fields, it’s easy to run controlled experiments or do empirical studies. It’s true that controlled studies only tell you something about a very limited set of circumstances, but the fix to that isn’t to dismiss them, but to fund more studies. It’s also true that it’s tough to determine causation from ex-post empirical studies, but the solution isn’t to ignore the data, but to do more sophisticated analysis. For example, econometric methods are often able to make a case for causation with data that’s messier than the data we’ve looked at here.

The next most common response is that their viewpoint is still valid because their specific language or use case isn’t covered. Maybe, but if the strongest statement you can make for your position is that there’s no empirical evidence against the position, that’s not much of a position.


Thanks for the effort you put into this epic study, Dan! Spotted via Lambda the Ultimate.

Castagna: A Handbook for PC Chairs 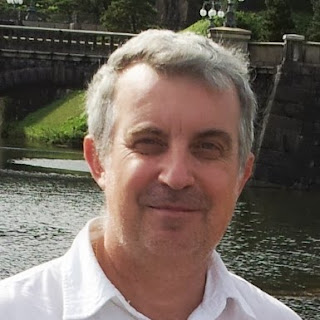 Giuseppe Castagna published a 12-page guide based on his experience chairing ECOOP 2013. It includes pithy advice such as the following.


As a side note, I suggest to send to PC members as few emails as possible and to repeat all important information in every mail: never assume that if you wrote something in a mail, then every member of the PC knows it (my personal experience was that many of the important pieces of information I wrote in my mails were missed by one ortwo members, not always the same ones).

Beppe's handbook is a useful addition to the literature on how to run a conference, including several written by members of SIGPLAN.