Why I am on strike 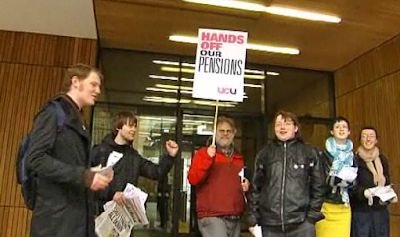 An open letter to my colleagues in the School of Informatics.

Here are four people to think of when considering whether to join the
UCU strike to preserve our pensions on Thursday 24 March.

Bill, a student ten years from now. In the long run, our goal is to
keep our Universities strong for students and the country. On the
picket line last Thusday, I saw more students than lecturers.

Me. I saw lecturers cross the picket line on the grounds that they
had an appointment, and did not want to inconvenience the person they
were to meet. If you are one of them, perhaps your politeness would
extend to allowing me to retire with a decent pension.

Thank you for your consideration, -- P

Comments:
Why not save the money yourself rather using pyramid-scheme pension system?

^ why not investigate what pensions actually are before you say stupid things? It's his money that's he's been paying in and he wants to get it out.

Demonstrate to me how pensions are a pyramid scheme. You can't because they aren't not similar at all.

Very sorry to learn that things are so tough for universities in the UK. First students were attacked, now staff. Where will it end?

Money paid into pension schemes is not stored in most Western governments. It's spent - it's the next generation's money that is used to pay for them.

Note, however, that there is a difference between a stable and an unstable pyramid scheme. That's where most arguments tend to focus.

Nice warning to the current generation to NEVER NEVER trust the government with your money. Stop listening to altruistic crap (which the looters use as excuse for swindling) and keep your money with yourself,

or be prepared to chant on the streets.

why o why do people think it is good to give government their money.. haven't they learnt it?

why were they silent when the government was spending their money away by printing money like crazy and pouring it down into bottomless wells?

This strike should have happened then. It is far far too late now.

A few commenters have missed the point that USS (the pension scheme in question) is a fully funded pension scheme, unlike pensions for civil servants. Employees and employers pay in money each year, which the fund invests. The fund is in the black, and took in more money this year than it paid out.

As people live longer, adjustments are required to keep the fund viable. UCU (the universtity staff union) has proposed modest changes that do the trick. The changes being pushed through by EPF (the employer's organisation) are mainly about saving money for employers, not keeping the fund in the black.

Oh dear, what a lot of uninformed people. The UK academics pension scheme (USS) is not a government scheme, it is a private scheme, the second largest private scheme in the UK. The funds are invested in stocks and bonds and property, and it holds sufficient funds to meet 100% of liabilities. Again: IT IS NOT A PUBLIC SECTOR SCHEME, IT IS A PRIVATE SCHEME

Now﻿ this was a fight for civil rights, equality, workers' rights, and fair treatment, not sweetheart deals, ridiculous entitlements, and gravy train benefits. Some of the things union members call "rights" now would likely bring tears to Dr. King's eyes.