What Sequential Games, the Tychonoff Theorem and the Double-Negation Shift have in Common

A recent paper by Escardo and Oliva, to appear in MSFP 2010, relates diverse aspects of computing, in the form of a literate Haskell program. I've written a further note inspired by theirs, also as a literate Haskell program. My code improves on theirs in a few ways, notably by using type classes to characterize valuation types, and by using QuickCheck to describe and check relevant properties. My note can be read stand-alone, but is best read in conjunction with Escardo and Oliva's paper. (The photo above is Cantor Set by Kevin van Aelst.)

Does Your Language Shape How You Think?

From an article in the New York Times by Guy Deutscher, describing linguistics view of the Sapir-Whorf hypothesis, seventy years on. Taken from his book Through the Language Glass: Why the World Looks Different in Other Languages. Spotted on Lambda the Ultimate.

For instance, some languages, like Matses in Peru, oblige their speakers, like the finickiest of lawyers, to specify exactly how they came to know about the facts they are reporting. You cannot simply say, as in English, “An animal passed here.” You have to specify, using a different verbal form, whether this was directly experienced (you saw the animal passing), inferred (you saw footprints), conjectured (animals generally pass there that time of day), hearsay or such. If a statement is reported with the incorrect “evidentiality,” it is considered a lie. So if, for instance, you ask a Matses man how many wives he has, unless he can actually see his wives at that very moment, he would have to answer in the past tense and would say something like “There were two last time I checked.” After all, given that the wives are not present, he cannot be absolutely certain that one of them hasn’t died or run off with another man since he last saw them, even if this was only five minutes ago. So he cannot report it as a certain fact in the present tense.

I wish all scientists were trained in this language! 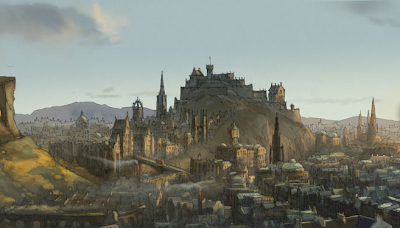 L'Illusionniste, Sylvain Chomet's second film and Jacques Tati's last, is a remarkable film; The Guardian gave if five stars. The film also reflects a tortured family history. Among other things, it is a love letter to Edinburgh, with loving depictions of many familiar locations. I saw it in the Cameo; how often do you watch a film that includes a scene in the very place you are sitting? While many of the settings are easy to identify, I could not place one key location, the 'Royal Music Hall' (see below)---did this actually exist in Edinburgh, and if so, where? 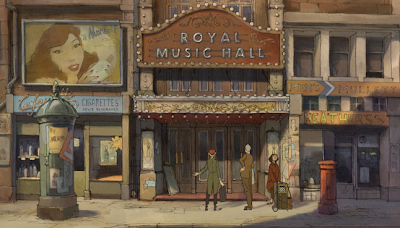 The Economics of Programming Languages

Network effects are clearly significant in the spread of programming lagnuages. I've often thought it would be good to team up with an economist to see if one could say something more forceful than just that simple qualitative observation. Meanwhile, I'm pleased to find the web page linked to above, which covers at least the obvious correspondences. (NB., the picture is from a different page.) 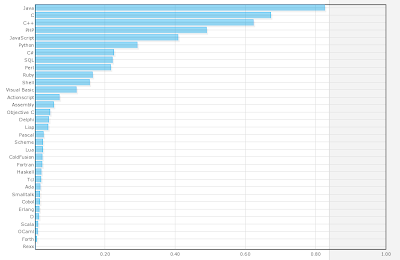 A site that tracks popularity of Programming Languages. Many of my favorite languages appear on the list. Interesting to see that (for this week at least) the order is Scheme, Haskell, Smalltalk, Erlang, Scala, O'Caml.

Sights and sounds of sorting


Nifty visualisation with sound of several sorting algorithms. It covers insert, bubble, selection, merge, and gnome sort; a related video tackles heap sort. Could be useful for teaching. Below is a second visualisation with robots.

Masterminds of Programming, edited by Federico Biancuzzi and Shane Warden, has just won a Jolt award. The book features interviews with the creators of many programming languages, including a chapter on Haskell with contributions from Paul Hudak, John Hughes, Simon Peyton Jones, and myself.

A previous post described the SEC's plan to clarify certain kinds of trades by describing them using a computer program, written in Python. Responses to the SEC's request for comments are now online, including a response jointly submitted by USACM and SIGPLAN. My thanks to all the experts who volunteered to help us formulate a response and ensure it represented the views of the USACM and SIGPLAN membership.