If the Matrix ran on Windows

If programming languages were X

Lambda the Ultimate has a collection of analogies of the form 'If programming languages were X' for X varying over religions, cars, and so on. My favorite is girlfriends.

An ingenious set of combinators for expressing pattern matching in a type-safe way. No ADTs required. Opens up the possibility of programming languages where we can declare new binding forms just as we declare new functions. Revolutionary, but may have been hard to publish before Programming Pearls were created---it shows why they are a good idea.

Every few years, the UK Government conducts the Research Assessment Exercise, to determine the quality of research of every department in every university. The results for the most recent exercise are out, and by any measure Informatics at the University of Edinburgh did very well.

The Price of Forgoing Basic Research

An article by Bill Buxton in Business Week, making the case that too much emphasis on applications is counterproductive. My favorite line:

To be blunt, I believe that when academic research starts demonstrating industry relevance is when funding should be cut off, not augmented.

Facebook tells me the photo at left was shown at the Informatics Chrismas Meal. Caption: '"Some believed we lacked the programming language to describe your perfect world." says Agent Smith. Well, they should've used Lamda Calculus!' 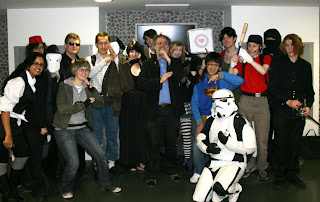 Every year I enjoy teaching Haskell to Informatics 1, but this year was spectacular. The students decided to attend the last day of lectures in fancy dress, and brought cupcakes decorated with lambdas. This year's programming competition was also exceptional. Every year there are one or two stunning entries, but this year we felt we had to award prizes to no less than seven!