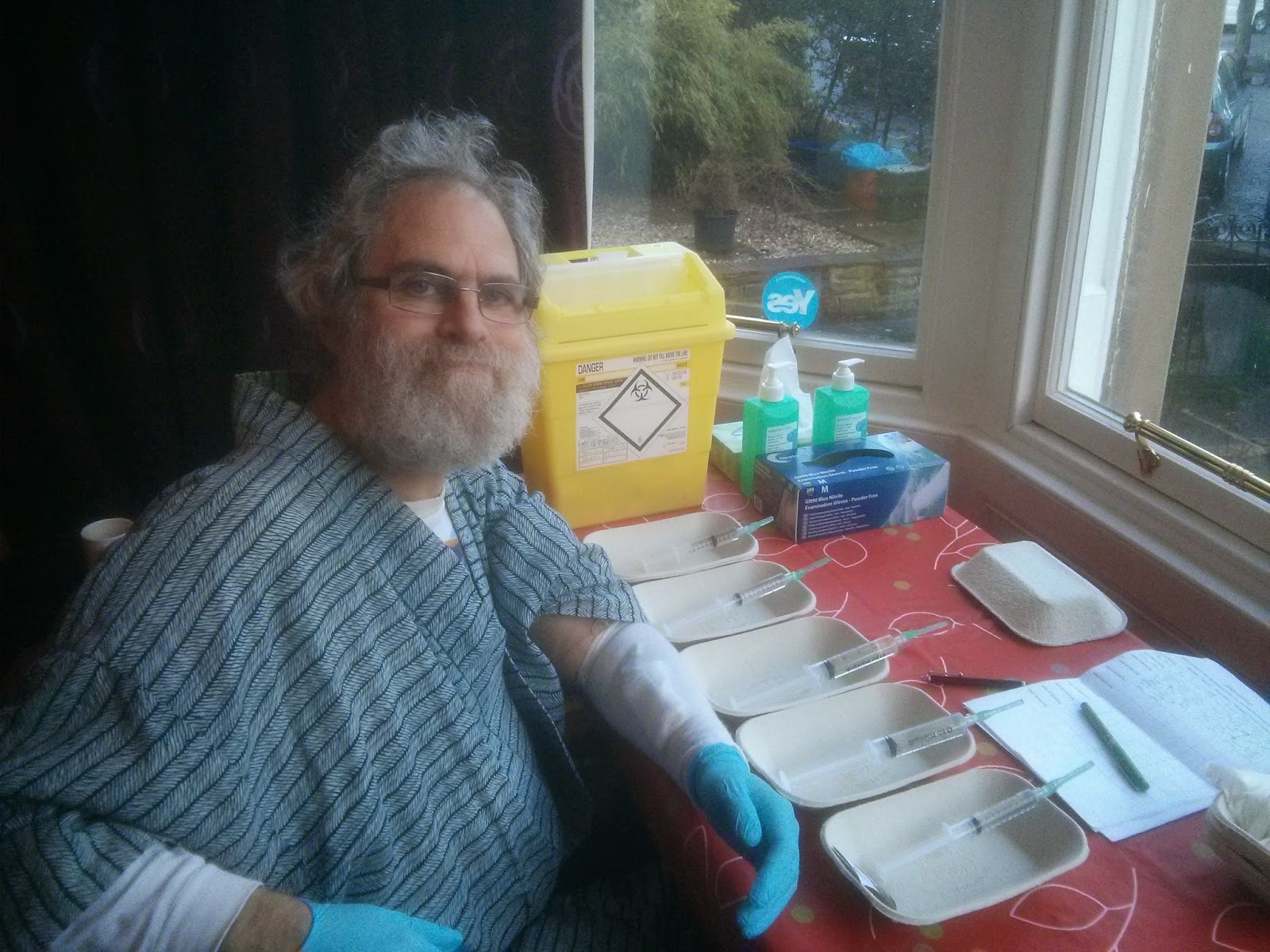 I am off work this semester, being treated for two things: an infection affecting my heart and abdomen; and a tumour on my kidney. I was in hospital 17 Dec—2 Jan, and self-administered antibiotics as an outpatient 3 Jan—29 Jan. The photo shows me partway through self-administration, which required 90 minutes each day.

The infection of my heart and abdomen appears cured, and I am feeling much better. I am awaiting an appointment with urology. It is likely the kidney will need to be removed. The tumour, I am told, is too small to have metastasised. I will have better information once I meet my urologist, but my current guess is that I will be back at work sometime in March.

My thanks to the NHS and to the Western General Hospital for the excellent treatment I have received, and to all my colleagues for their support. 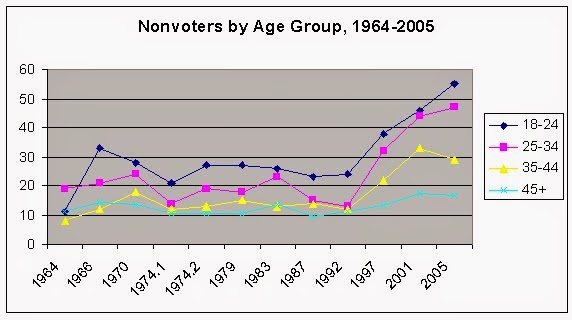 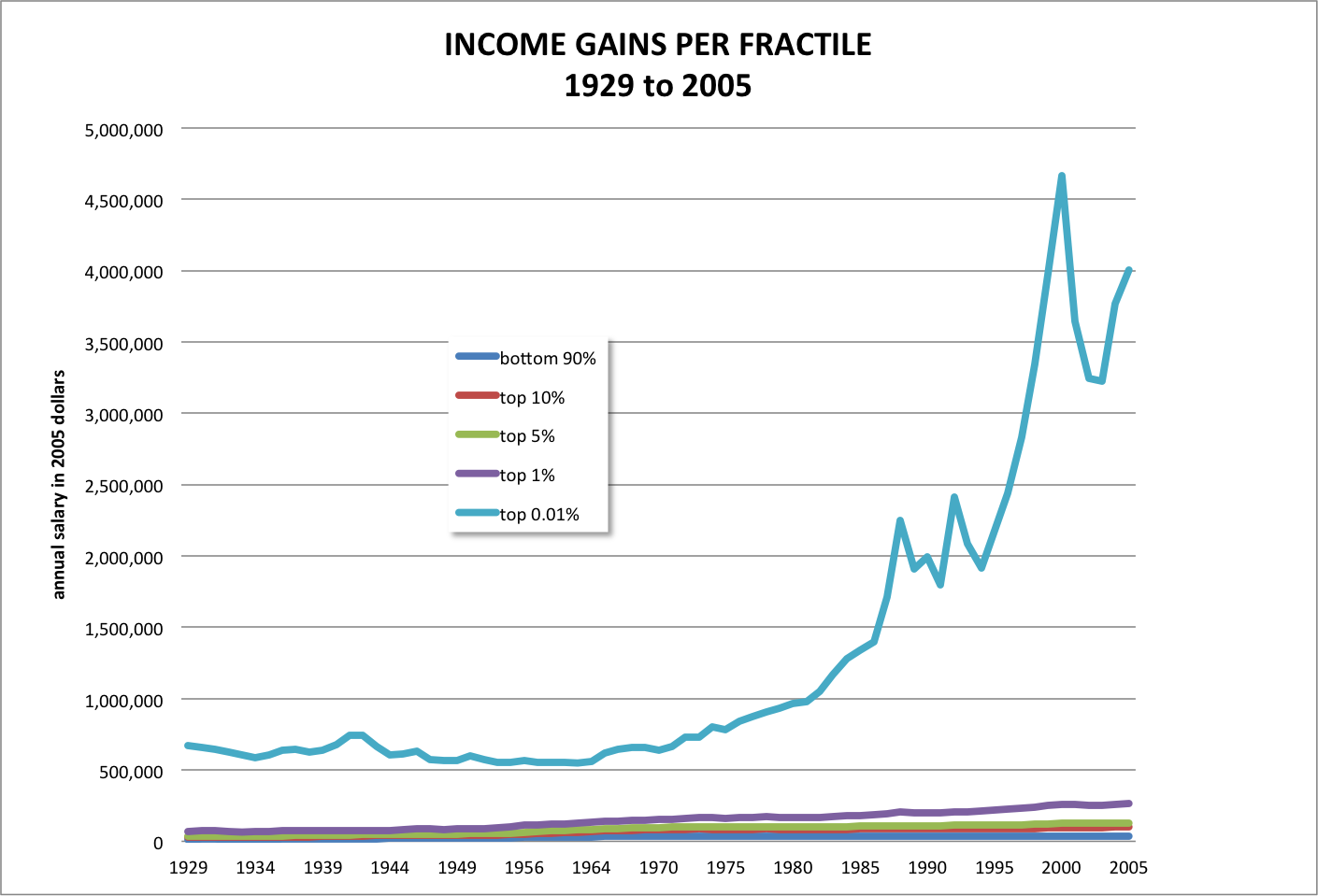 To celebrate the 750th anniversary of the first meeting of the British parliament, the BBC Today programme sponsored a special edition of The Public Philosopher, asking the question Why Democracy? The programme spent much time wondering why folk felt disenfranchised but spent barely two minutes on the question of how wealth distorts politics. (Three cheers to Shirley Williams for raising the issue.) An odd contrast, if you compare it to yesterday's story that the wealthiest 1% now own as much as the other 99% combined; or to Lawrence Lessig's Mayday campaign to stop politicians slanting their votes to what will help fund their reelection; or to Thomas Picketty's analysis of why the wealthy inevitably get wealthier. (tl;dr: "Piketty's thesis has been shorthanded as r > g: that the rate of return on capital today -- and through most of history -- has been higher than general economic growth. This means that simply having money is the best way to get more money.")

My email is a monster 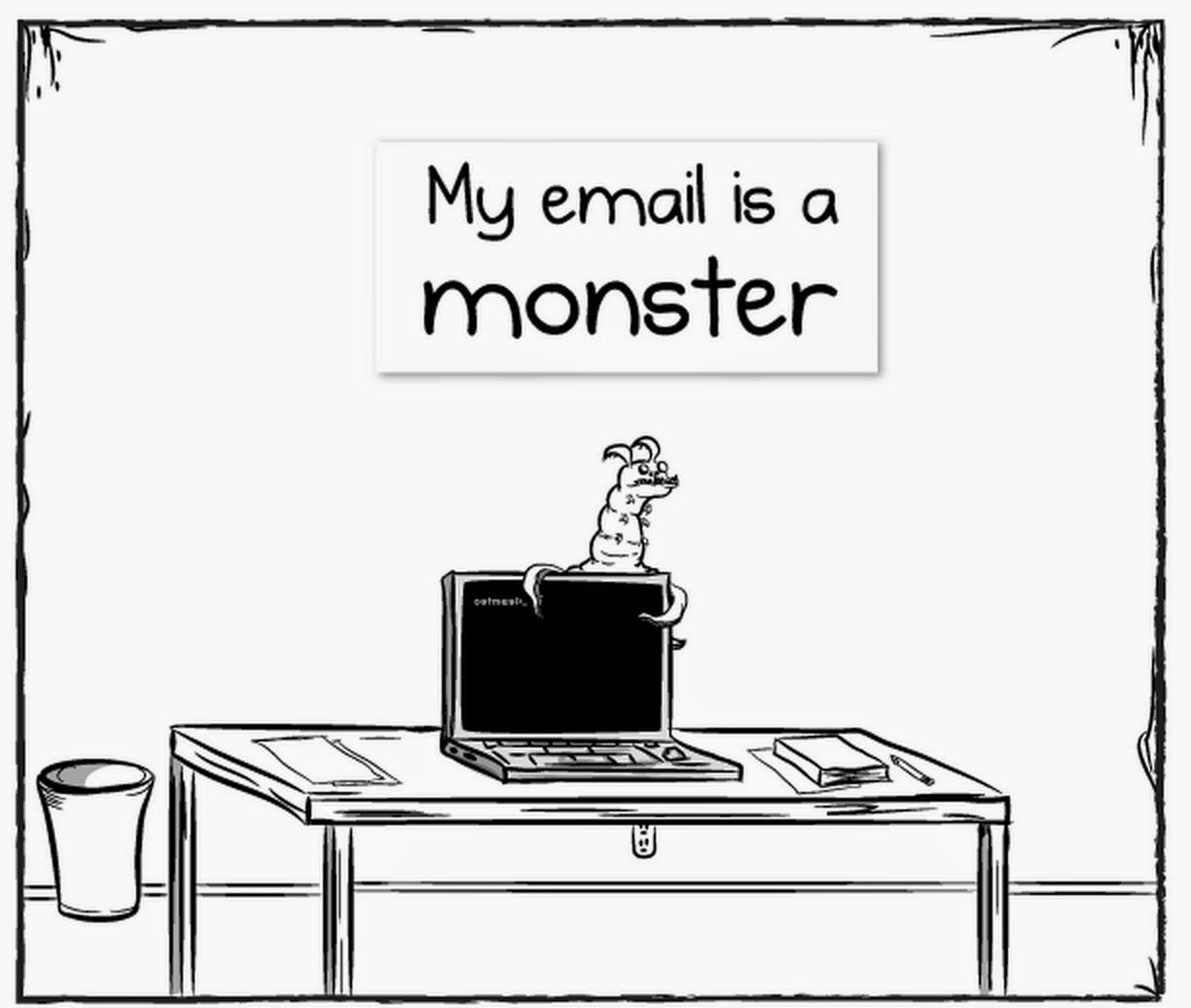 My New Year's resolution is to look at my e-mail at most once a day. If you need a response in less than a day or two, please arrange it with me in advance or use a different medium. Cartoon courtesy of Oatmeal.

Are the Greens or UKIP a major party? Have your say. 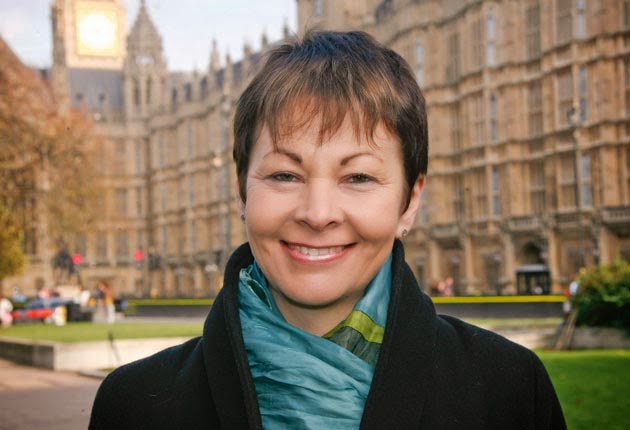 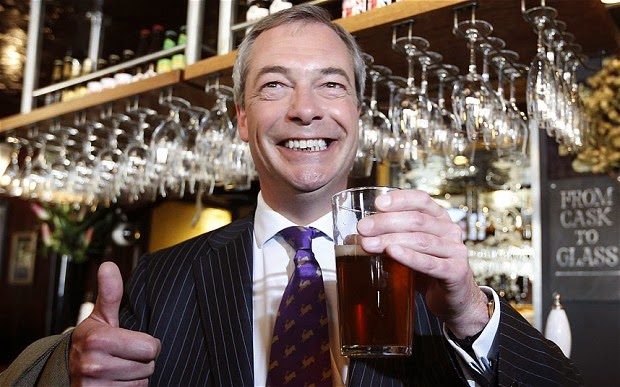 Ofcom has issued a draft ruling that the Greens are not a 'major party' but that UKIP is. Hard to justify, one might think, given that Carolyn Lucas has been a sitting MP since September 2008, while UKIP did not acquire its first MP until a by-election in October 2014. One consequence of Ofcom's decision is that the Greens may be shut out of any televised national election debates, while Farage is given a seat.

It's a draft ruling, and there is still time to have your say.
My own response to Ofcom is below.


Question 1: Please provide your views on:
a) the evidence of current support laid out in Annex 2, and
b) whether there is any other relevant evidence which you consider Ofcom should take into
account for the purposes of the 2015 review of the list of major parties:

Question 2: Do you agree with our assessment in relation to each of:
a) The existing major parties,
b) Traditional Unionist Voice in Northern Ireland,
c) The Green Party (including the Scottish Green Party), and
d) UKIP?
Please provide reasons for your views:

It is a scandal to include UKIP as a major party while excluding the Greens. Either both should be included, or both excluded. I would prefer to see both included.

While UKIP enjoys stronger support than the Greens in current opinion polls, this is a shortlived phenomenon in part driven by the increased coverage recently given to UKIP by news media. Ofcom's role should be to dampen the effect of media focus on the current bandwagon, not to amplify it.

Ofcom should ensure that all serious contenders have an opportunity to make their views heard. The cutoff for being a 'serious contender' should sit at support from around 5% of the electorate.

Question 3: Do you agree with the proposed amendment to Rule 9 of the PPRB Rules Procedures outlined in paragraph 3.7 above? Please provide reasons for your views:

I do not agree with the proposed amendment. It is stated the parties 'might'' raise unsustainable complaints, but no evidence is provided that this is a serious problem. It is more democratic to leave the decision to the Election Commission than to give Ofcom the ability to refuse complaints without any right of appeal.

[I note also that the reference on the web form to 'paragraph 3.7 above' is confusing. Not only does the relevant paragraph not appear on the web page with the question, the web page does not even contain a link to the document containing the paragraph.] 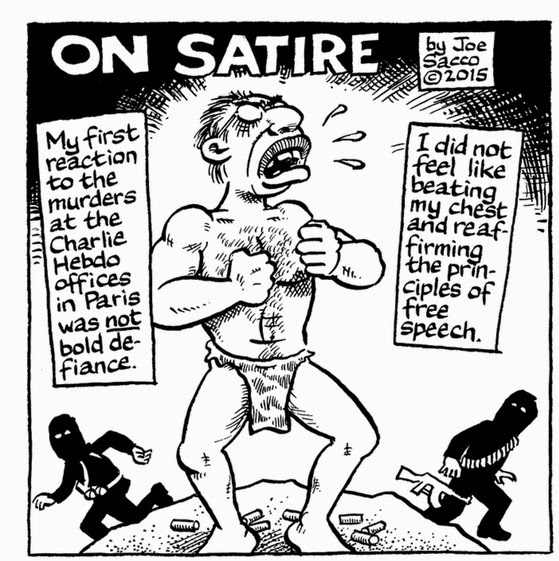 Joe Sacco is my favourite graphic-novel journalist. All of us deplore the attack on Charlie Hebdo, but his response is the most thoughtful analysis I've seen.

A contrary view to 'Antidotes to the Imitation Game'

For five years, Barry Cooper has run the Alan Turing Year (ATY) mailing list, tracking worldwide activity related to the Turing Centennial and after. If you want a contrast to the view given by Antidotes to The Imitation Game, see Barry's most recent ATY post.

While I agree that fiction can sometimes can closer to truth than nonfiction, I disagree with Barry's claim that the 'higher-order' interpretation of the film accurately captures the arc of Turing's life. I suspect the real Turing differs hugely from the film's version, despite the effort and skill Tyldum, Cumberbatch, and others invested in the film.

Many computing scientists are disappointed by the divergence from history in The Imitation Game, while others think that if it does well at the Academy Awards that the popularisation of Turing will be good for our profession. There is something to be said for both points.

Hollywood's attempts at biography seems to inevitably involve gross oversimplification or distortion. Is this really necessary for a film to succeed? Does anyone have favourite examples of films that did not grossly distort their subject matter?

Antidotes to The Imitation Game 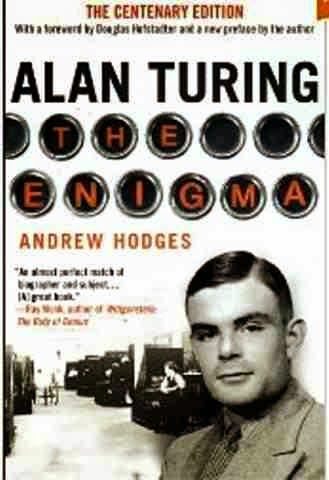 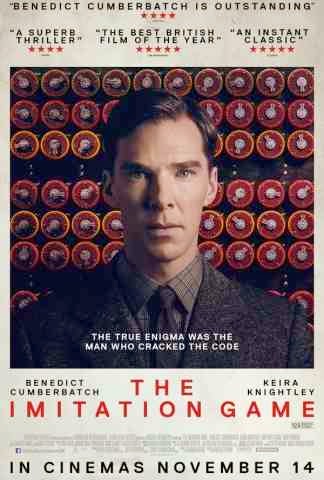 I was so disappointed by the treatment of Alan Turing in The Imitation Game that I devoted a standup routine to it. "The film begins: 'Based on a true story'. Now I know what that means: 'Contains characters with the same names as real people'. Preferably dead, so they can't sue for defamation."

The following articles, better than I could, debunk the treatment meted out to Alan Turing by the film. If you see the film, give them a look as well.