PLDI and PACMPL - have your say! 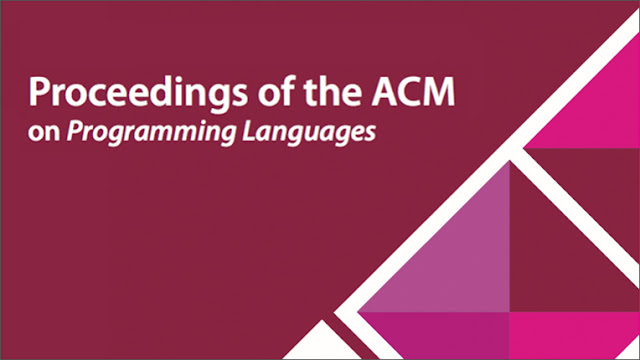 Proceedings of the ACM on Programming Languages (PACMPL) is a new, open-access journal that will archive the results of major programming language conferences sponsored by SIGPLAN and ACM. So far, ICFP, OOPSLA, and POPL have signed on. There is, to my surprise, a raging debate as to whether PLDI should do so. The issues are blogged here, and there is a survey here.

As Editor-in-Chief of PACMPL, I may be prejudiced, but it seems to me the case for PLDI to join is a no-brainer.  Programming languages are unusual in a heavy reliance on conferences over journals. In many universities and to many national funding bodies, journal publications are the only ones that count. Other fields within computing are sorting this out by moving to journals; we should too. Journals cover a wide range of different publications, and our better conferences sit toward the high-quality end of this range. ICFP, OOPSLA, and POPL were all enthusiastic to join; is PLDI that different?

Becoming a journal requires a slight change to procedure: an extra round for referees to ensure necessary changes have been made. The extra round increases reliability of our archival publication—good, as we don't want to build our field on sand!—and may permit the PC to be more adventurous in accepting borderline papers.

Most importantly, all papers in PACMPL will be open access, thanks to generous underwriting by SIGPLAN. The price ACM is charging is too high, and we will continue to press them to reduce it. But it is only by going to open access that SIGPLAN can survive—the alternative is that our conferences, including PLDI, will wither, to be replaced by others that are open access.

I urge you to fill out the survey, as it is your opinion that could tilt the balance. Though the survey is non-binding, it will powerfully influence the PLDI Steering Committee when they vote on the issue next month. It just takes a minute, do it now! 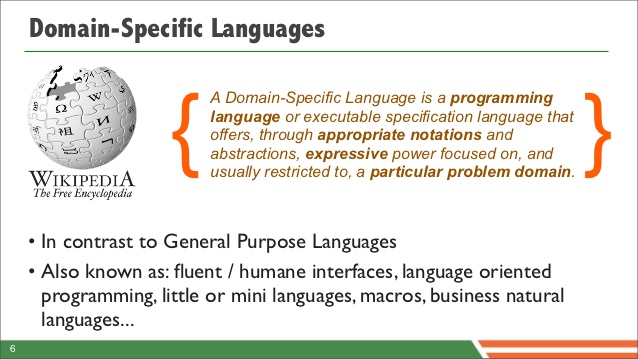 
DSLDI is a single-day workshop and will consist of an invited speaker followed by moderated audience discussions structured around a series of short talks. The role of the talks is to facilitate interesting and substantive discussion. Therefore, we welcome and encourage talks that express strong opinions, describe open problems, propose new research directions, and report on early research in progress.
Proposed talks should be on topics within DSLDI’s area of interest, which include but are not limited to: 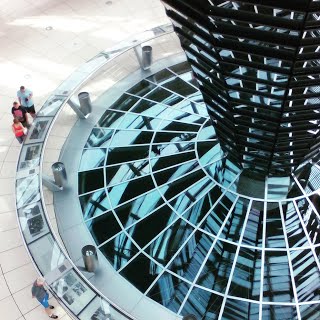 
As you know, submissions to RADICAL could be, for instance:- reports of an ongoing work and/or preliminary results;- summaries of an already published paper (even at CONCUR'17 - see below);- overviews of (recent) PhD theses;- descriptions of research projects and consortia;- manifestos, calls to action, personal views on current and future challenges;- overviews of interesting yet underrepresented problems....Many thanks for your cooperation!Julian and Jorge

Monbiot: I’ve never voted with hope before. Jeremy Corbyn has changed that 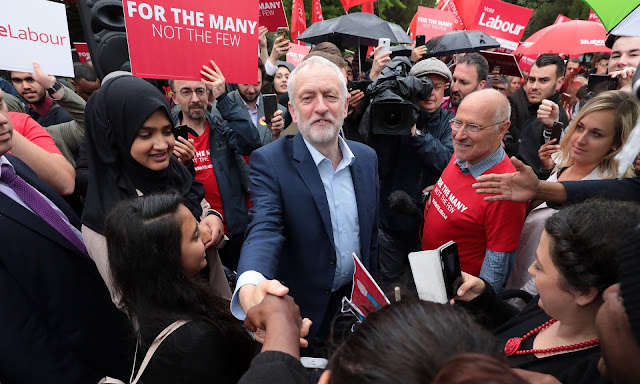 Leave it to George Monbiot to make the most effective case for Labour.


On policy after policy, the Labour manifestoaccords with what people say they want. It offers a strong and stable National Health Service, in which privatisation is reversed, clinical budgets rise and staff are properly paid. It promises more investment in schools, smaller class sizes, and an end to the stifling micromanagement driving teachers out of the profession. It will restore free education at universities. It will ensure that railways, water, energy and the postal service are owned for the benefit of everyone, rather than only the bosses and shareholders. It will smoke out tax avoidance, and bring the banks under control.
While Theresa May will use Brexit as a wrecking ball to be swung at workers’ rights, environmental laws and other regulations the Conservative party has long wanted to destroy, Labour has promised to enhance these public protections. It will ban zero-hours contracts, prevent companies from forcing their staff into bogus self-employment, and give all workers – whether temporary or permanent – equal rights. The unemployed will be treated with respect. Both carers and people with disabilities will be properly supported. Those who need homes will find them, and tenants will be protected from the new generation of rack-renting slumlords. Who, apart from the richest beneficiaries of the current regime, would not wish to live in such a nation?  ...

[May] won’t stand up to anyone who wields power. She will say nothing against Donald Trump, even when he peddles blatant falsehoods in the aftermath of terrorist attacks in this nation, exploiting our grief to support his disgusting prejudices; even when he pulls out of the global agreement on climate change.
She is even more sycophantic towards this revolting man than Tony Blair was to George W Bush. She won’t confront Saudi Arabia over terrorism or Yemen or anything else. ...
She won’t stand up to the polluters lavishly funding the Conservative party, whose role explains both her weakness on climate change and her miserable failure to address our air pollution crisis. She won’t stand up to the fanatics in her party who call for the hardest of possible Brexits. She won’t stand up on television to debate these policies because she knows that the more we see, the less we like. The party machine’s attempt to build a personality cult around her fell at an obvious hurdle: first, you need a personality.  ...

The election now hangs on whether the young people who claim they will vote Labour are prepared to act on this intention. We know that older Conservative voters will make good their promise: they always do. Will the young electors, who will lose most from another five years of unresponsive government, walk a couple of hundred metres to their polling stations? Or will they let this unprecedented chance to change the nation slip through their fingers? The world belongs to those who turn up. 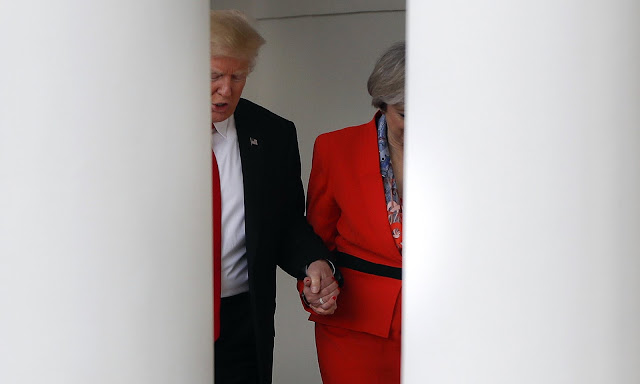 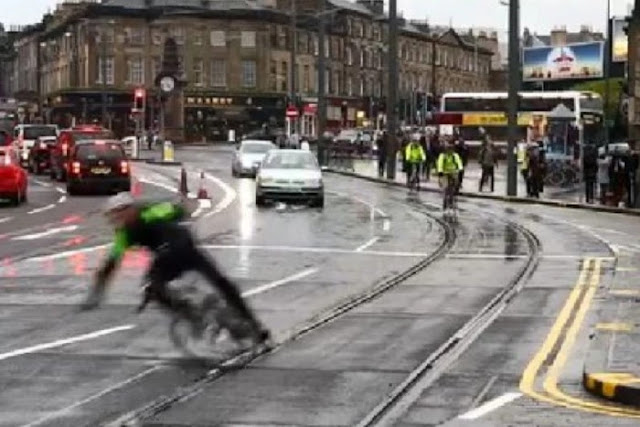 I slipped a couple of years ago on the tram tracks, a hundred meters from where this accident happened. I broke my little finger, Zhi Min Soh lost her life. Please consider attending tomorrow morning's event in her memory.

The death on Wednesday (31st May) of a young woman in Edinburgh on Wednesday has hit a nerve with cyclists across Scotland. She appears to have been killed after her bike slipped on the tram tracks on Princes Street.
Edinburgh’s tram tracks have been described as an accident waiting to happen from the moment they were unveiled. [H]undreds of cyclists have been injured from falls on the tracks, and thousands more have had close shaves. This Wednesday (7th June), at 8:30 am, cyclists in Edinburgh will be marking Zhi Min Soh’s death. There will be a short, respectful protest at the junction where she died, reflecting the emotion that has bubbled up in the days since this senseless death. Although we are not organising it, we fully support this action and ask anyone who can to come and join them, on bike or on foot, and whether you cycle or not.If you can attend, please make your way directly to Shandwick Place for 8:30 a.m. If you can, bring a sign or a placard letting people know what it is about. People will gather at the junction for a minute’s silence, and a lament from a piper to remember this death, and to ask for the City of Edinburgh to take action to ensure that it will be the last.

I suggested a team-up, and, lo, it appears! 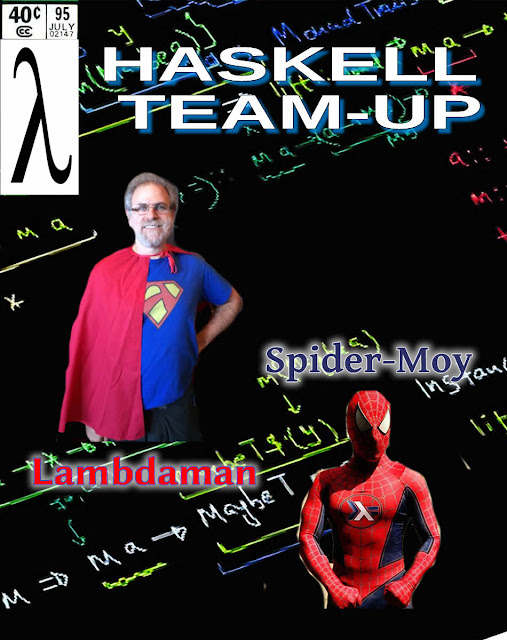 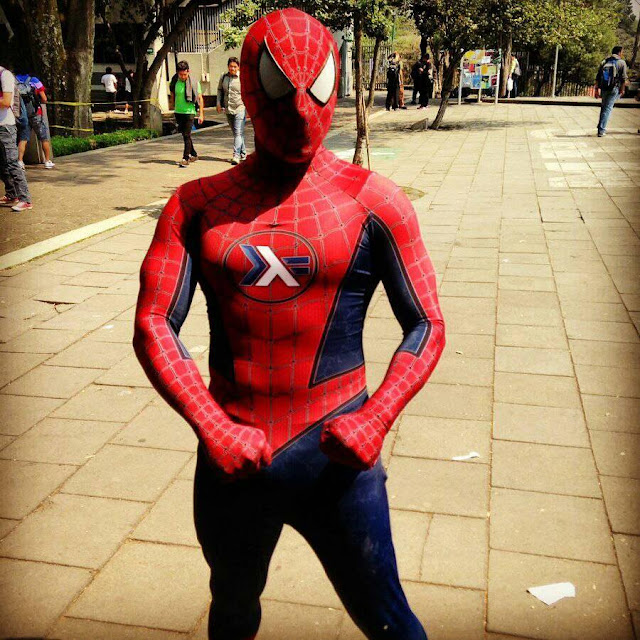 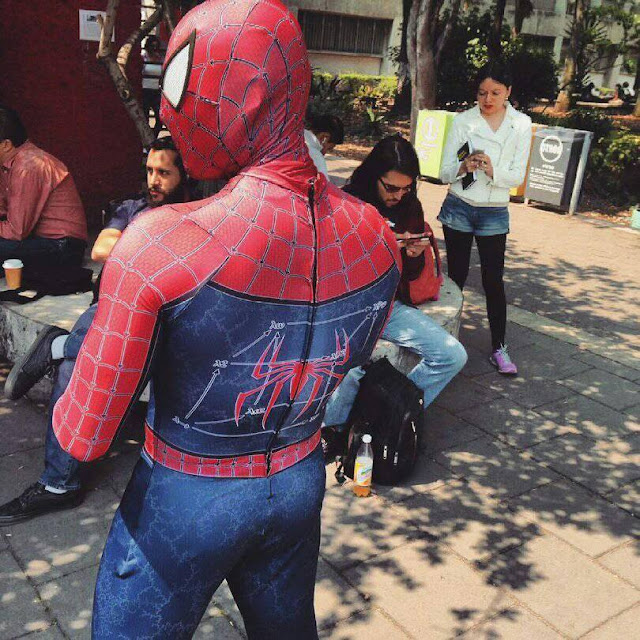 I was delighted and gobsmacked to hear from Moises Vazquez, a university teacher from Mexico who has a penchant for dressing up as Spider-Man. Reuters reports:


"I do the same job as anyone else, I don't think it's the best class in the world just because I put on a suit. But I assure you I want to be the most honest and dedicated there is, I just want to make the classroom a better place," he said.

I am blown away by his costume, with amazing detail such as Barendregt's lambda cube on the back and categorical arrows for webbing. Time for a superhero team-up? 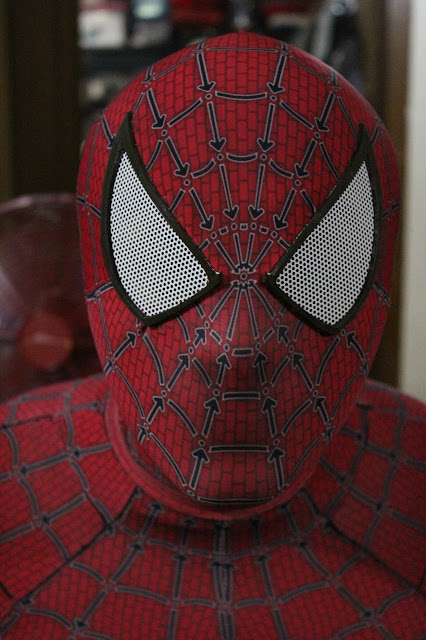 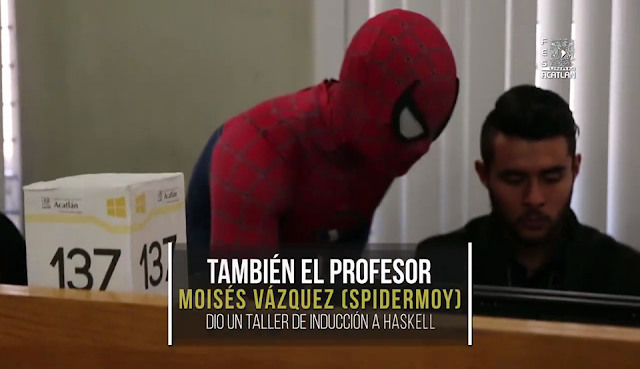 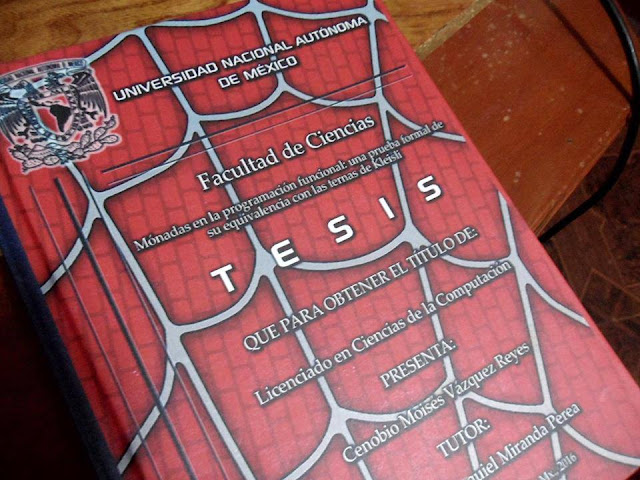