From Glory, by Greg Egan, a story about one alien race trying to uncover the mathematics of another alien race, three million years old.

The theorem itself was expressed as a commuting hypercube, one of the Niah's favorite forms. You could think of a square with four different sets of mathematical objects associated with each of its corners, and a way of mapping one set into another associated with each edge of the square. If the maps commuted, then going across the top of the square, then down, had exactly the same effect as going down the left edge of
the square, then across: either way, you mapped each element from the top-left set into the same element of the bottom-right set. A similar kind of result might hold for sets and maps that could naturally be placed at the corners and edges of a cube, or a hypercube of any dimension. It was also possible for the square faces in these structures to stand for relationships that held between the maps between sets, and for cubes to describe relationships between those relationships, and so on.

That a theorem took this form didn't guarantee its importance; it was easy to cook up trivial examples of sets and maps that commuted. The Niah didn't carve trivia into their timeless ceramic, though, and this theorem was no exception. The seven-dimensional commuting hypercube established a dazzlingly elegant correspondence between seven distinct, major branches of Niah mathematics, intertwining their most important concepts into a uniﬁed whole. It was a result Joan had never seen before: no mathematician anywhere in the Amalgam, or in any ancestral culture she had studied, had reached the same insight.

Fun with correlation and citations

I'm sure I'll want to cite this someday, possibly in class but perhaps in the pub. What I'll be citing it as an example of, I'm not yet sure. Thanks to Leonid Libkin for spotting this.

Who can resist
Sierpinski cookies and fractal pizza? Spotted via Boing Boing. 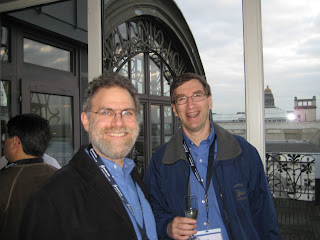 Last week I delivered a keynote at AOSD, on Well-typed programs can't be blamed. It was a marvelous opportunity to learn more about aspects, and more about Brussels.

The photo shows me with Gary Leavens atop the Musical Instruments Museum. You wander around wearing a headset, and when you stand next to an instrument you can hear it play. Someday soon, our whole world will be augmented in this way; but you won't need a specially supplied headset, you'll use your phone. One pleasure of my trip was to meet Wolfgang De Meuter and Tom Van Cutsem, whose Ambient Oriented Programming is aimed at just such applications.

People I enjoyed meeting include Dean Wampler, Eric Eide, Curt Clifton,
Emilia Katz, Maja D'Hondt, and Ellie D'Hondt. Ellie works in quantum computation, and told me (rather to my surprise) that monads have an application there. She had once read one of my papers on monads, but found it too difficult. This cheered me up, since I feel the same when I try to read about quantum computation.

Special thanks to Theo D'Hondt, Viviane Jonckers, and Isabelle Michiels for organizing the conference so well.

If you use Lisp and disdain Haskell, or vice versa, you'll want to read this brilliant Orwellian strip by Conrad Barski. Spotted by Ehud Lamm at Lambda the Ultimate. Thanks Conrad! Thanks Ehud!