Myths about the gagging law 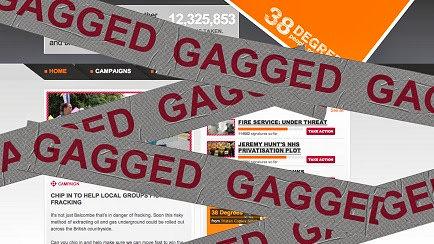 In three weeks, MPs have their final vote on the gagging law - a law that would mean ordinary people, campaigning groups and charities would be severely restricted in how they can campaign in the year leading up to an election.

The most recent debate was last Tuesday, and we lost a key vote by only a whisker - if just 16 more government MPs had switched sides, a key part of the gagging law would have been defeated. [1]

The growing MP rebellion was in part thanks to you - tens of thousands of 38 Degrees members flooded MPs with emails, phone calls and tweets. 80 local groups of 38 Degrees members went to see their MP face-to-face. Together, we proved that ordinary people are prepared to fight for their right to campaign on important issues.

Conservative and Liberal Democrat MPs are clearly feeling the heat: a growing number of them have started trying to fob us off. They’ve started making all sorts of claims about what the law will and won’t do. They say we have nothing to worry about.

Ros Baston, an independent political law and election solicitor, has taken a look at some of the most common lines MPs have been using when responding to 38 Degrees members and written a detailed document. [2] Here's 38 Degrees take on that document and why we still think we have something to worry about.

Myth 1: The new law will stop "big money" buying / influencing elections.
The government claims that this law is needed to stop US-style "super-PACs", run by millionaires, flooding the airwaves with negative political advertising. But they can't point to any examples of millionaire-backed "super-PACS" in the UK actually existing. Perhaps that's because we already have laws banning big money radio and TV advertising.

The way "big money" actually influences elections in the UK is through massive donations to political parties. That's a huge problem, with wealthy donors basically buying influence and peerages. The gagging law does nothing to stop this - millionaire party donors like Lord Ashcroft or Lord Sainsbury can continue to funnel as much cash into their chosen party as they like.

If the government really wanted to stop "big money" influencing politics, they could introduce a maximum donation limit for both political parties and independent groups. That would tackle the current problem and prevent any future rise in "super-PACs", and it's a measure 38 Degrees members would certainly support. Why are they instead targeting charites, community groups and campaigners?

Myth 2. Civil society will still be allowed to talk about issues - as long as they don’t get involved in party politics.
Important issues which ordinary people care about, like trying to protect the NHS, will be a key election issue for most of the political parties.The gagging law would apply to campaigning on most issues that are being contested by different political parties - i.e. any big issue of the day! For example, if one political party made privatising NHS services a key part of its manifesto, then a 38 Degrees campaign against privatising the NHS would be considered ‘for election purposes’ and be subject to the gagging law. [3]

Myth 3. £390,000 is a lot of money. Why should organisations be allowed to spend more?
In a free society, charities, local groups and ordinary people should be able to come together and campaign effectively. £390,000 is only 2% of what political parties are allowed to spend. Also, the new law says that charities and campaign groups will have to include core staff costs in this limit - something political parties aren’t expected to do.

Groups like 38 Degrees don't need as much money as political parties - we rely on people power rather than expensive advertising agencies. But organising people power does cost some money. 38 Degrees currently costs around £1.1 million per year to run - money spent on maintaining a powerful and secure web site, a small office, a staff team of 15, printing leaflets and posters, hiring church halls for member meetings, and so on. That's all funded by small donations (average donation £10.78) and reported in full in the annual audited accounts. [4]

Banning 38 Degrees from spending more than £390,000 would mean big people powered campaigns like Save our NHS or Save our Forests would be impossible to run.

Myth 4. Charities are happy now that some concessions have been promised
This isn’t true. A wide range of organisations including NCVO, Oxfam, Christian Aid, Countryside Alliance and Friends of the Earth are still warning that the gagging law will have a huge impact on what they can campaign on. [5]

MPs have been claiming that NCVO are now happy with the amendments the government has committed to drafting. In fact the NCVO wrote a piece in The Guardian last week highlighting the problems they still think need solving [6]:

“NCVO and the wider voluntary sector have made it clear that the legislation remains ambiguous and potentially damaging in a number of places. In particular:
The government is rushing the gagging law through parliament, but we now have just over two weeks to try to convince MPs to vote the right way. The office team are working hard to pull together some ideas of ways to beat this law and you’ll get an email about this soon. But if you want to get back in touch with your MP and ask him or her about some of these myths, please click the link below.
https://secure.38degrees.org.uk/gagging-law-email-mp

If your MP has replied to your email about the gagging law and sent through a different claim you'd like help answering, or if you have some ideas on what we should do next in the campaign, then please get in touch at emailtheteam@38degrees.org.uk.


Thanks for being involved,

P.S. Earlier this year thousands of 38 Degrees members joined forces with the Children’s Society to call for more children to be given school meals. Yesterday, Nick Clegg announced that children aged 4 - 7 years would get free school meals. That is 1.4 million more school children getting a hot, healthy lunch. Another brilliant victory 38 Degrees members were involved with, proving just how important campaigning is.

Can you be arrested for sharing a link? 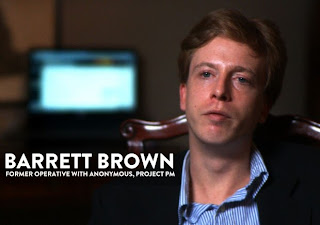 
In 2010, Brown launched Project PM, a group effort billed as a crowdsourced investigation into the “surveillance state.” When Lulz Sec hackers stole some 70,000 emails from security firm HB Gary Federal and posted them online in February 2011, Brown and fellow Project PM members went to work, uncovering a coordinated campaign to discredit Wikileaks and journalist Glenn Greenwald, among other serious revelations. Later, in December of that year, Anonymous posted more than 5 million emails swiped from intelligence contractor Stratfor Global Intelligence, which were read and mined for information by Brown’s Project PM. Those emails contained a slew of revelations, including talk among Stratfor employees of renditions and assassinations.

During the Stratfor investigation, Brown shared a link to the stolen company emails in an IRC chat with other Project PM members. The documents contained some 5,000 credit card numbers and other personal information of a slew of individuals.
...
Two months later, prosecutors charged Brown with 17 crimes, 12 of which are related the identity theft – all because of that link he shared.
...
Brown did not hack any computers. He did not steal any information. And none of the charges he faces allege that he did. Brown simply shared a link that contained stolen data – something journalists, and many other people, do online every day. He faces up to 105 years in prison.