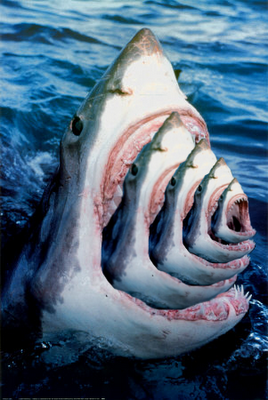 I have just remembered your request for a picture of a creature, with lots of heads and a tail.

Let's think of shark's head as an element in the list. This way one could think of ":" as shark teeth 'connecting' to other shark (Cons even look like a mark from a bite!). Then the head of the smaller shark is the head of new list, and the tail of the list is the bigger shark.

If we assume that water is [], then it also works in the bottom case with no elements in the list (no sharks) - only water. And water swallows the shark up to it's head so this also work (shark : []).

Comments:
Hm. If the intuition is that x:[] is an x being eaten by water, then it might be a good idea to flip the picture horizontally, so that the left-to-right direction of the sharks agrees with the dicrection of the list cells?

On the other hand, thinking about the in-memory representation of lists it's perhaps more accurate to say that x:[] is an [] being eaten by a (x:). Then the base case does not correspond to a situation involving sharks though.

"cons" is the list constructor but, of course, sharks with their sharp teeth are more likely to be destructors!

Paul, Can you explain what you do with paper clips and index cards? Cheers, -- P