Cycling: Past, Present and Possible Futures

Spokes Spring meeting last week hosted Prof Colin Pooley, of Lancaster University, speaking about a detailed study of why people do and don't cycle. The standout lesson, from interviews and surveys, was that people don't cycle because they don't feel cycling is safe. His report concluded with a list of recommendations:
The meeting was also attended by Andrew Burns, City of Edinburgh Council Leader (who reported it on his blog). The last question Councillor Burns was asked was whether he could remember the first recommendation on the list, but he could not. Which I think encapsulates the problem neatly.

The first recommendation is for separated cycle routes, as found in Copenhagen, Amsterdam, and elsewhere. ("Copenhagenize" is now a verb.) To Edinburgh's credit, it has allocated 7% of its transport budget to cycling. How much of that is going to separated cycling routes, and the other recommendations on the list? Councillor Burns says segregated routes are planned for George Street and Leith Walk. I argued we need a more agressive plan. Listening to Pooley, the problems sound difficult, but all we really need are the money and the will. Let's construct a network of separated cycle routes covering the city. Build it, and they will come!

(Above: Edinburgh Links, one of the few segregated bike routes in the city, and my ride to work each morning. Below: Copenhagen.) 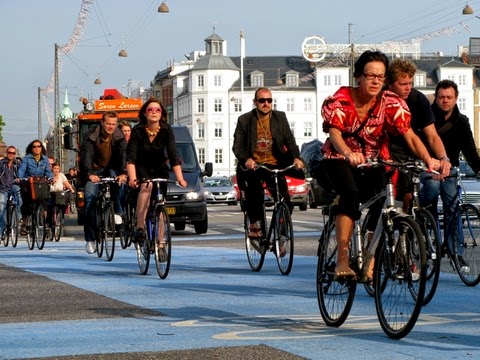