Roseburn to Leith Walk Cycleway: A vs B 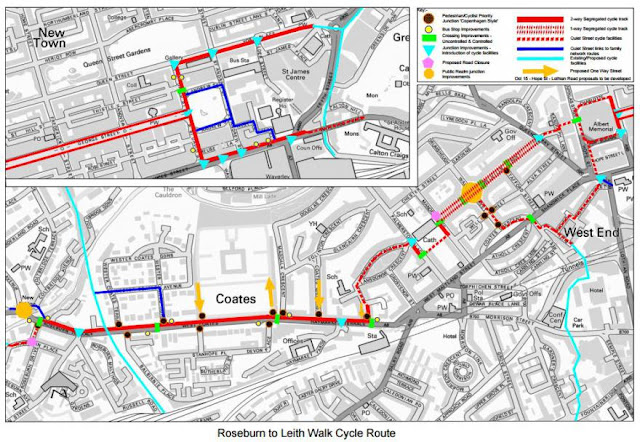 Edinburgh City Council has released its report on consultation on the Roseburn to Leith Walk cycleway, and Henry Whaley has written a comment for the Edinburgh Evening News.

A few shopkeepers in the area are concerned that the cycleway will have a negative impact on their shops, a well-known cycling fallacy. Whaley describes the current impasse:


The Council have responded to specific concerns from some shopkeepers and residents by reinstating the loading bay on the north side of Roseburn Terrace, increasing the right turn lane and eliminating the floating bus stop whilst maintaining the cyclepath to form a much improved ‘Option A’.
The Council are also assessing an alternative ‘Option B’, which would take the cyclepath away from Roseburn Terrace, on an indirect and complicated route involving three road crossings as well as restricting the space for motor vehicles at the already tight Roseburn Street Junction and not widening the Roseburn Terrace pavements. It’s another option, but one that is worse for most people.

And from the City Council:


Transport Convener Councillor Lesley Hinds said: "We had an overwhelming response to the consultation and the exercise has been extremely helpful to officers working on the proposed Roseburn to Leith Walk cycleway and street improvements.
"Thanks to the feedback received, we've been able to make deliverable adjustments to a number of aspects of the scheme. In terms of the Roseburn section, local concerns have prompted us to present an alternative route (Option B) via Roseburn Place and Roseburn Street for consideration by committee members. However, we remain in favour of Option A because it will enhance the street environment in Roseburn Terrace and is more direct for cyclists - involving one road crossing rather than the three that would be required for Option B.
"After further planned consultation with businesses, community councils and the Council's Active Travel Forum, the project team will consolidate feedback and finalise the preliminary design scheme for presentation to the Transport and Environment Committee on 30 August 2016."