Option A vs B: Kicked into the long grass 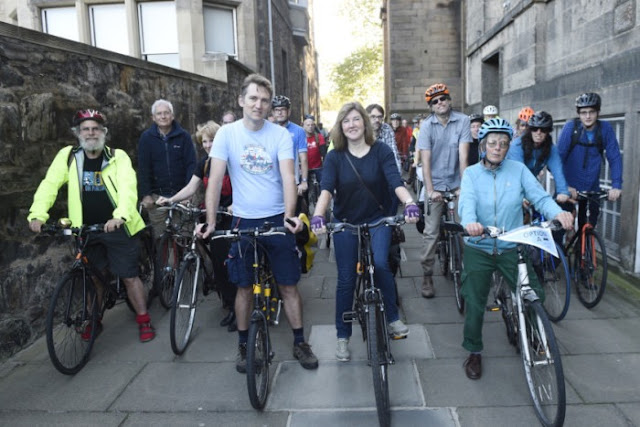 I've been putting off posting about the final outcome of the West-East Cycle Route confrontation at Edinburgh City Council's Transport and Environment committee, in part because there was no final outcome.

I sat through four hours of Edinburgh Council's Transport and Environment Committee. The end result was a fudge. The Council heard adamant depositions from both sides, and decided not to decide. They will form a stakeholder group, with representatives from all involved, and attempt to come to a compromise that satisfies all sides. But it's hard to see how that can happen: if we don't get a straight route it will be a disaster, but if we do folk in Roseburn will fear an impact on their businesses (studies show cycle routes don't harm business, but they seem to be taking the Gove line: they are tired of hearing from experts).

Dave duFeu of Spokes posted an excellent summary, including links to the webcast of the meeting and a list of the steps you can take to support the West-East Cycle Route.

The Edinburgh Evening News offered coverage in the two days before: Cyclists take to street to support £6m cycle “superhighway” and D-Day for cycleway in Edinburgh amidst anger and division. The first of these features a couple of photos of me arguing with opponents of the cycle route in Roseburn. I don't look calm and collected. Oddly, I can't find any coverage the Evening News gave to the outcome of the Transport and Environment committee meeting. Was there any?

Not only are Roseburn residents up in arms. A similar cycleway in Bearsden, near Glasgow, is attracting comparable ire from its locals. What is our best way forward to fight bicycle bigots?

Previously:
Option A: Think about the children