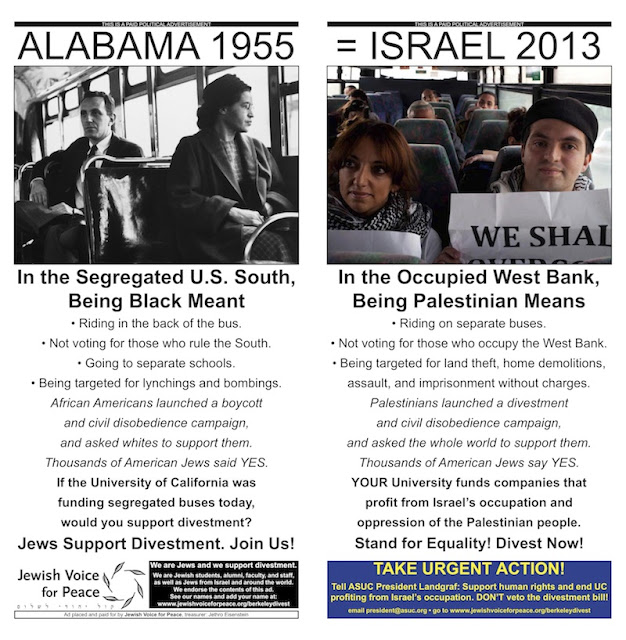 Last night, the President of the Associated Students of the University of California (ASUC) announced that he would not veto a UC Berkeley Student Senate resolution in favor of divestment from companies that profit from the Israeli occupation.

Sad to say, I think boycott, divestment, and sanctions are becoming the best way forward.

Comments:
Sad to say but you've failed to stop spoiling Planet Haskell for general public with your political remarks.

(same anonymous as above) Sorry, I've missed 'politics' tag on entry. Obviously not your fault anymore.

Well, as far as I know being black in Alabama on 1955 didn't mean you might be a terrorist planning to commit suicide on the bus and murder all the men, women and children on it.
But that's just a minor detail. I'm sure it has nothing to do with why Palestinians ride on separate buses.

It is such a huge disappointment to see you post such a stupid comparison.
You are a scientist. You are supposed to question what others claim, to do some research and study the facts.
Here, let me help you:
http://en.wikipedia.org/wiki/List_of_Palestinian_suicide_attacks

The fact that you were fooled by such clear and shallow propaganda should tell you something.

Disclaimer: I am Israeli. I believe in the two states solution, separated by a clear border. I believe Israel should withdraw from the West Bank (as it did in Gaza).

Thank you Philip for spreading the truth.