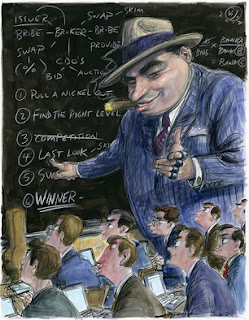 Matt Taibbi at the Rolling Stone continues to uncover unconscionable behaviour by the banks coupled with failure of governments to prosecute.

Conspiracy theorists of the world, believers in the hidden hands of the Rothschilds and the Masons and the Illuminati, we skeptics owe you an apology. You were right. The players may be a little different, but your basic premise is correct: The world is a rigged game. We found this out in recent months, when a series of related corruption stories spilled out of the financial sector, suggesting the world's largest banks may be fixing the prices of, well, just about everything.
You may have heard of the Libor scandal, in which at least three – and perhaps as many as 16 – of the name-brand too-big-to-fail banks have been manipulating global interest rates, in the process messing around with the prices of upward of $500 trillion (that's trillion, with a "t") worth of financial instruments. When that sprawling con burst into public view last year, it was easily the biggest financial scandal in history – MIT professor Andrew Lo even said it "dwarfs by orders of magnitude any financial scam in the history of markets."
That was bad enough, but now Libor may have a twin brother. Word has leaked out that the London-based firm ICAP, the world's largest broker of interest-rate swaps, is being investigated by American authorities for behavior that sounds eerily reminiscent of the Libor mess. Regulators are looking into whether or not a small group of brokers at ICAP may have worked with up to 15 of the world's largest banks to manipulate ISDAfix, a benchmark number used around the world to calculate the prices of interest-rate swaps.

Everything Is Rigged: The Biggest Price-Fixing Scandal Ever